This Month ( Jan. 2012), ICOD Action Network's Executive Director was invited to speak at the Northwestern University Conference on Human Rights in Evanston Illinois. Michael spoke on the Panel entitled Failure of Distribution: Feeding Today, Starving Tomorrow alongside Ms.Joy Labez, an Assistant Director in US Government Accountability Office, Mr. Paul Macek, Senior Director of Food Security & Livelihoods at World Vision and Mr. Marc Cohen who is senior researcher on humanitarian policy and climate change at Oxfam America. We are glad to share with you some of the content from his presentation. Enjoy our 3rd 2012 article. 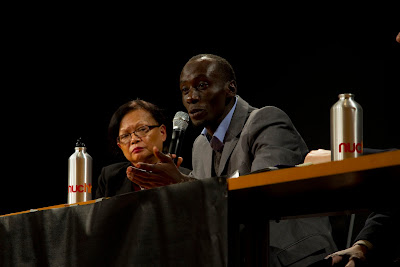 Uganda's economy is predominantly agrarian; 81% of the employed labor force, and agricultural sector accounts for 20-25% of GDP. However, since 2002, agriculture growth has lagged other sectors’ growth significantly.

Over the last four decades, Uganda has been a major recipient of food aid and international aid assistance. Some of the contributing factors include civil wars, poverty, and periodic lack of food supply, natural disasters and poor governance, which has affected major development sectors including food production and agriculture investment. In November and December 2011, floods displaced families in six districts in eastern Uganda, over 70000 people were affected by floods, landslides, hailstorms and related disasters countrywide. Floods left victims without any kind of food or shelter. Aid agencies and government responded by pledging support and delivering food items and tents to the affected areas. Few days after the distribution centers were set, no tangible signs of relief efforts could be seen. Why? Food aid and shelter were distributed depending on the populations’ political affiliations.

Uganda is currently experiencing famine and food shortages in Eastern and Northern Uganda and Its estimated that the country looses approximately $245m due to malnutrition .

Uganda is one of five priority nations taking part in the Feed the Future program, an initiative to boost food security and economic development in the developing world. In Uganda, the U.S. Agency for International Development is focusing on three crops -– maize, beans and coffee – and working with local agriculture officials to develop new ways to process, store, transport and market the commodities. Greater availability of Ugandan food products would allow the World Food Program and others providing emergency aid to famine victims in the East Africa to buy supplies fresh and locally rather than import them. Long term, it is hoped that the effort will help build a greater East African agricultural trade that could prevent famines in the future.

The purpose and form of food aid always varies with target groups and the timing of interventions. In many instances, food aid has contributed to improved diets for recipients, helped communities overcome disaster and served as relief to “third world countries. The integration of food assistance into longer-term development efforts is an important action. Such integration may require that some activities be supported with resources not just food provision e.g to capacity building, building democratic governments and health care infrastructure development. For example, Feed the Future is currently working with Uganda’s Ministry of Health and other partners to strengthen systems for improved delivery of proven maternal anemia intervention. Anemia affects 64% of pregnant women and 49% of non pregnant women in Uganda .

Whereas food aid bridges the gap between food access and food needs, thereby preventing asset depletion and promoting asset build-up among households, it has intended (short run) and unintended (long-term) effects. These effects have food security implications that are felt at household, national and regional levels. By increasing the supply of food in the affected communities, for example, food aid could improve food availability at household and national levels but could dampen prices, create dependency, and lower production.

For example, In Uganda for example, food aid and feeding programs were in the early 1990s used to attract people living with HIV/AIDS to care, counseling, training, or income-generating activities. In Kampala, Uganda, for example, a pilot project supported by WFP used food as an incentive for street children (many orphaned by AIDS) to participate in vocational training programs. In other instances, food programs offered general relief to PLWHA and their families and helped safeguard existing assets which otherwise would be used to acquire food. These projects in Uganda have been used as an inducement to draw people to specific community- based activities.

Representation of communities and Food aid requests by Charity Organizations

Food aid and charitable organizations get donations through what is presented as the “true” facts on ground. Unfortunately, most data presented in charity advertising misrepresents and humiliates the supposed beneficiaries who are assumed to be passive and unable to help themselves. For example during the Lord’s Resistance Army insurgence in Northern Uganda, local and international media and charity organization focused on publishing pictures of big belled children, starving women and street children displaced by war to raise funds. Some pictures had been taken years before they were published, and still, even after the war, some media houses still publish the same photos to raise funds. Example no.2, Margaret Thatcher summed this when she said of the Ethiopian farmers “We have to try to teach the basics of long term husbandry. However, the fact is, there is very little developing countries can teach courageous people from the “third world”; they already know basics of their trade, have extracted a living form their mountainsides for thousands. All they need if they do is their productivity in the face of ecological disasters.

Gender in relation to insecurity in Uganda

One of Uganda’s key policy documents is the Poverty Eradication Action Plan (PEAP), National Agriculture Advisory Services and the National Food and Nutrition Policy, which are national planning frameworks and all recognize the right to food as a right. All these policies seek to address major development challenges and eradicate poverty and increase the right to food and nutrition at all times to vulnerable groups and through increasing access to agriculture extension services. However, none of them presents concrete proposals to boost food security and influenced by political actors in implementation of their activities.

1. The core values of ICOD Action Network are deeply rooted in dignity, justice, inclusiveness/ community participation and accountability. Resources are used in ways hat are mutually transparent and acceptable to all stakeholders including our partners and donors. This is complemented by the highest standards of accountability towards affected communities we serve and fulfilling the goals of our existence.

Our approach is also boosted by our decision to use a Rights Based Approach to Programming which we adopted in 2008 that we believe will help create a common platform for collective action and help communities themselves find lasting solutions to solve their most pressing problems.

As we have earlier noted from previous discussions and presentations, food assistance and foreign have direct impact (positive and negative) on rights of intended beneficiaries who in most cases are living very inhuman conditions due to disasters. Donors and receipt governments need integrate them into longer-term development efforts. Such integration may require that some activities be supported with resources from outside food aid, these may include among others, building infrastructure, building and sustaining existence of strong and vibrant non-state actors like civil society organizations, fighting corruption and building democratic governments that provide secure environment for individual, institutional and national development.

ICOD Action Network is a registered Non Governmental Organization operating in Uganda, East Africa. Founded as Integrated Community Efforts for Development(ICOD) in February 2008, ICOD Action Network’s work extends beyond material support and touches upon the need to empower communities so that they can be able to sustain themselves.

ICOD Action Network has continued to inspire individuals in Southwestern Uganda's to find innovative and sustainable local solutions to end extreme poverty, hunger and diseases. These individuals have demonstrated leadership, selflessness and passion to help their community break barriers to individual and community development and have worked with their communities to find lasting solutions independent from external support. We have continued to work with and train such leadership to move their communities forward.

ICOD’s vision is; “creating an empowered community, free from disease and suffering, leaving in pleasant conditions where human rights are observed”.

The organization is guided by the following objectives;
1. Working for sustainable community development of the rural poor, orphans and other vulnerable groups of people.
2. Increased awareness on HIV/AIDS to positively change people’s attitude and behavior
3. Improved capacity of communities and families to care and support for people living with HIV/AIDS and other vulnerable individuals.
4. Increased household income levels of rural communities.
5. Improved capacity of orphans, youth and other vulnerable children to take informed decisions about their lives and improve their socio- economic status.
6. Advocate for adherence and observance of fundamental human rights in the community.